Undead Party is Rolling in the Grave!

The Undead Party is not going to take this snub lying down. Get a free download of The Undead Candidate – the first episode in the Cord Wheaton Saga – free! Available on Kindle for download on 10/18-20 (Tue-Wed-Thu)

Tired of Clinton or Trump?

Then read about Zach Taylor – the first zombie for president! This is the origin story of the saga, where our hero, St. Petersburg, Florida detective Cord Wheaton encounters a zombie for the first time, and has to convince the department that what he saw was real. 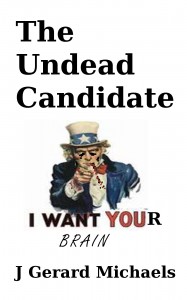 This saga is pre-apocalyptic! Originally written in time for the Obama-Romney debates, it’s even more timely now, with two of the least-liked candidates in history running for president.

Now is the time for a small party upset. Write in Zach Taylor for president! His vice-president is Bat Skitman. It’s time to get Zach Bat Fever!

Why settle? Have you voted yet? Zach is counting on you as a write-in candidate. (After four years you’d think he’d get on the ballot, but his campaign has been undead all this time.)

Get it in time to read BEFORE the debate, DURING the debate, or AFTER. It doesn’t matter. Once you hear Zach’s platform, you’ll be convinced he’s the right zombie for president. He’s for the harvesting of all expired brains, and for equal treatment for all people, living and undead. Vote for Zach and Bat!

Get the Kindle version here – and read it on your Kindle device, your pc, your phone – and see what the Undead Party can do for you.

[This announcement has been brought to you by the High-minded International Campaign Committee for the Undead Party (HICCUP). It is in no way affiliated with the candidate nor is it coordinating its efforts with him.]